the (possibly) definitive guide to stereo vs. mono albums: introduction 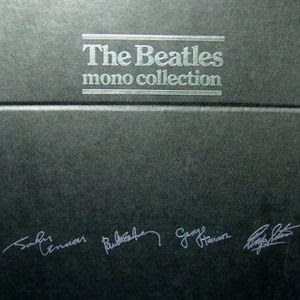 At long last, I've come up with an idea for a new project! This is my first post in an album-by-album examination of the stereo vs. mono mixes of the core 13 studio albums.

For those who don't already know, all of the studio albums except for Yellow Submarine, Abbey Road, and Let it Be were originally recorded in mono. That means that all of the sound came out of one channel. That's in contrast to recording in stereo, where you might hear the drums in the right channel, and the lead guitar part in the left channel (that would correspond to the right and left headphones). Despite the fact that the band originally recorded all of those albums in mono, though, most people have only really heard the stereo mixes of the albums that the engineers made without the band. Stereo mixes were made alongside the mono mixes because stereo was a pretty hot new trend in the 1960s, and mono was considered sort of out of date.

Most people who aren't hardcore Beatles fans were totally unaware of the major differences between the stereo and mono mixes of these albums until 2009, when the albums got a total remastering and were released as stereo and mono boxsets. However, for whatever reason, Apple didn't release a boxset that reflects only the mixes the band authorized (that would mean mono mixes for everything but Yellow Submarine, Abbey Road, and Let it Be).

The remasters were done extremely well, but this project is going to examine the differences between the stereo and mono mixes as they're heard on vinyl. That means that I'm limited to what I have in my collection (and what I can track down at the UChicago radio station). I'll go through each album and explain what, in my opinion, you gain from listening to the original mixes.

Other places on the web have guides of this sort, but to my knowledge, no one has done this using the original vinyl pressings and with this kind of completeness.

I hope you enjoy it!
Posted by 4headedmonster at 9:36 PM

Email ThisBlogThis!Share to TwitterShare to FacebookShare to Pinterest
Labels: beatles