Why calling the Beatles a boy band is so insulting

Today, I came across an article in Forbes that made me both very happy and very upset.

Reason to be happy: The Beatles are one of two bands in this crazy year to sell 1 million units. Excellent!

Reason to be upset: The other band is BTS—a Korean pop group—which, the author surmises, is fitting because both BTS and the Beatles are “boy bands.”

This is far from the first time the “boy band” moniker has been applied to the Beatles. It irks me every time because it’s deeply insulting and really lazy writing, especially for a reporter who follows the music industry.

Well, let’s review what a boy band is: A boy band is a group manufactured by a record company explicitly to appeal to teenagers. Boy bands usually don’t write their own music. They have an image crafted by the record company. Sometimes they do have some degree of talent, but a boy band is essentially a marketing product.

Aside from their appeal to girls, the Beatles bear no similarity to the above definition.

They formed organically, only getting a manager who consciously tried to craft their image—Brian Epstein—once they had developed a decent degree of fame in Liverpool on their own.

They either wrote their own music or did covers. At no point was a song ever written *for* them. In fact, when George Martin tried to offer How Do You Do It for them—a typical song that would have been given to a band like the Beatles—they rejected it because they felt it was soft and would be embarrassing to bring back to Liverpool as their latest single.

John and Paul did write songs—especially early on—with their fan base in mind, but that was just good instinct on their part. There was little done by the record company to craft their image as appealing to teenagers.

Really, the “boy band” label not only inaccurately describes their story, but gives them no credit for the effort they put in to remain genuine to their own artistic instincts and desires.

To review, this is a boy band: 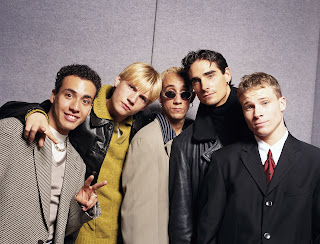 This is not a boy band: 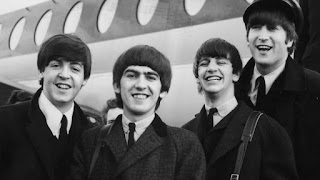 Posted by 4headedmonster at 3:36 PM