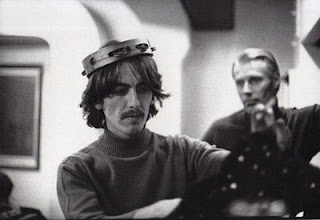 In the past decade or so (as far as I can tell), a lot of people have been fretting about the sorry state of the music industry. The internet spelled doom for record sales, and artists are now forced to tour almost constantly because it's virtually impossible to make a living off of record sales. But more than that, people have lamented the demise of high quality, but mainstream artists. Yes, there are countless incredibly talented artists out there right now (Andrew Bird, Animal Collective, Joanna Newsom, and Feist come to mind immediately), but none of those artists are on major record labels, so they enjoy relatively little exposure. Instead, the artists who top the Billboard 200 are, in large part, those who perform very safe, focus group-tested songs guaranteed to be chart toppers.

Now, one could say that this is because record labels have become so profit-driven that they're too risk averse to take a chance on an artist who might not be commercially palatable. I think there are two main problems with that theory: first, I don't believe that record labels are more profit-driven now than they were in the 60s or 70s when most of the best artists were on major record labels (Capitol's decision to reissue the Beatles' albums with different track listings was a clear ploy to make an extra buck or two) and second, the strategy they're employing now isn't guaranteed to make them more money than one in which they sign artists for their artistic merit alone.

Let's unpack that second criticism a little bit. Putting aside the argument that the best artists should get the most exposure, and so should be on major record labels, it just makes sense to me that record labels would sign artists based on their artistic merit, rather than on whether they can replicate a sound that has already been profitable. First of all, the output of the 60s and 70s showed nothing if not that most people appreciate objectively high quality music. The Beatles illustrate this more than perhaps any other group. Their music is some of the best ever written, and they remain popular among just about every demographic. How did they create that music? By taking artistic risks, which they were allowed to take by Parlophone and Capitol. Yes, they were unusually talented artists, but the fact of the matter is that the success of the Beatles suggests that if record labels simply signed artists based on their talent and allowed them to take artistic risks with their raw talent, chances are we'd see some of the most exciting music in decades.

So my suggestion for the record industry is summed up as this: let artists be artists. Sign the best artists to major record labels, promote them so that they become popular at the beginning of their careers and can make enough money from a tour to then sit back and record in a careful way that allows them to make the best album possible. People know and appreciate good music when they hear it (the enduring popularity of not only the Beatles, but Motown in particular, is a testament to this fact), and those albums will sell. Record labels will be highly profitable and some of the best music being recorded will again be given the exposure it deserves.
Posted by 4headedmonster at 3:42 PM