all things must pass: maturity in post-beatles solo work (part 1) 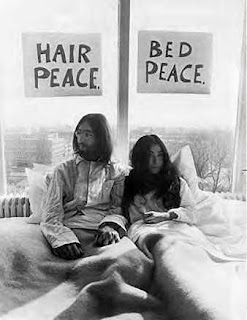 Jurgen Vollmer, one of the Germans whom John, George, Stu Sutcliffe, and Pete Best befriended in Hamburg during their stints playing nightclubs in 1960-62, once said that, due to his quiet demeanor, it was often easy to dismiss George Harrison. However, once you got to know him, it was quickly apparent that he possessed a certain maturity that the others lacked. Jurgen said that George looked you straight in the eye when speaking to you, and seemed genuinely interested in what you had to say.

What does examining John's and George's solo material through the lens of maturity tell us about them as artists?

I'm going to argue that George's solo material articulates its messages with more maturity and perspective than John's. However, in the interest of space, I'm only going to address John's output in this post. I'll save George's output for the next one.

Let me briefly address Paul's work, though, just to justify why I'm not including it in the overall analysis. I'd rather not compare Paul's work to George's and John's simply because I think the vast majority of Paul's work seeks a fundamentally different musical goal. Explaining that difference probably merits its own post, but for now I'll say that Paul's songs, with a few exceptions, simply aren't personal enough to evaluate according to the same criteria as George's or John's. The most explicitly personal McCartney song I can think of is "Here Today," his tribute to John. That's certainly a beautiful song, but one song isn't enough to go on. Much of the rest of his output involves stories or simple love songs. A lot of it is absolutely wonderful, but it's not particularly personal, at least not explicitly so.

Therefore, I think it's more appropriate to compare George's and John's catalogs. Both of them tended to write explicitly personal songs that arose from almost existential struggles. I'd characterize their songs almost as confessionals. However, there's a key difference in style between the two writers that, I think, suggests more maturity and nuance in George's work.

That difference comes down to the degree of subtlety. Take "Julia," for example. Anyone with any knowledge of John's past knows immediately that the song is about his mother, Julia. The lyrics are gorgeous and the song is haunting, but listening to it almost makes me uncomfortable because it's so explicitly about his struggles connecting with his dead mother.

For an even more uncomfortable experience, try "My Mummy's Dead." The track consists of John and an acoustic guitar, mixed so roughly that is sounds like a home demo. The lyrics are "my mummy's dead/I can't get it through my head/though it's been so many years/my mummy's dead/I can't explain/so much pain/I could never show it/my mummy's dead." As a listener, I almost feel as though I'm sitting in, uninvited, on John's therapy session with his psychologist.

Now why do I feel like this hyper-explicit, confessional music indicates some level of immaturity? It comes down to the function of an artist's output. An artist, I think, releases music because he/she wants to share something with his/her audience. Part of the reason that art is shared with the audience is, I think, to provide the audience with some product to which they can relate. However, by writing songs that are so explicitly personal, John sometimes made it difficult for his audience--at least in my case--to relate to his music. Even if I had a deceased parent, could I really relate to "Julia" or "My Mummy's Dead," when they don't seem to have been written at all for me? I think the expectation that we should purchase and enjoy songs clearly (I think) not written for us indicates some level of immaturity--or at least entitlement--on the part of the artist.

Now, none of this is to say that I don't enjoy John's solo material. I think much of it is absolutely gorgeous. However, I think the hyper-explicitly personal songs indicate some level of immaturity that George's music simply doesn't. I'll explain why I think George's solo material is more mature in the next post.

Do you agree? Disagree? Let me know in the comments!
Posted by 4headedmonster at 1:08 PM