Were the Beatles the Nerds of Rock? And what does it mean if they were? 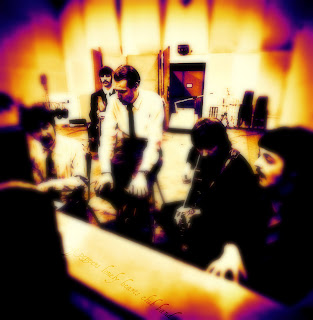 As not only the most famous and successful band in history, but also a group with an almost chameleon-like ability to reinvent itself, it's tempting to cast the Beatles as whatever is convenient in a given situation. Talking about music videos? Point to the videos for Paperback Writer and Rain as evidence that the Beatles invented MTV. Talking about yoga and Eastern philosophy? Point to George's sitar work and Rishikesh as evidence that the Beatles (or George in particular) were responsible for making Eastern spirituality palatable to Westerners. However, among all of this adulation, few ask what the band was not - or rather, what they failed to influence.

So in an effort to place some boundaries on their influence, I'd like to argue that the Beatles were not rock stars, in the Ramones, Kurt Cobain, Pete Townshend--or even Elvis--sense of the word. In other words, they did not rebel--for the most part--in the ways rock stars are supposed to rebel. When the Queen offered them MBEs, they took them (when John returned his, it was a political statement, not an act of pure insubordination). When Brian Epstein told them to wear suits to be successful, they wore them. The Beatles did not smash their guitars (like Pete Townshend and Jimi Hendrix did) or even get overtly sexual on stage (Mick Jagger, anyone?).

Instead, when the Beatles rebelled, they did so in cerebral ways. They used their tremendous wit to catch reporters off guard (How did you find America? Turn left at Greenland). They used their musical talents to blow apart the rock formula with painstakingly crafted songs, rather than basing their act on stage antics or somewhat juvenile acts of rebellion. In fact, one could argue that when the group confined itself to the studio after mid-1966, it showed its confidence in its ability to develop as a fresh, rebellious act purely on the back of the members' collective mental abilities (aka songwriting talents). This meant that their creative output became limited only by the confines of their imaginations, since they had no persona that they had to uphold, lest they change the foundation of their appeal.

So where does this leave us? I'd say it leaves us to conclude that the Beatles were, in many ways, the nerds of rock (to be importantly contrasted with geeks). As such, they did not influence the personas of rock stars like the Ramones and the Sex Pistols (in fact, many punk groups actively distanced themselves from the Beatles). The Beatles rebelled against the same things as virtually every other rocker (the establishment, in its various incarnations), but did so in a fundamentally nerdy, cerebral way. In the context of '60s rock, they were virtually unique in this respect. Thus, the Beatles distinguished themselves among rockers by not really being rockers at all.

To quote A Hard Day's Night: "Do you consider yourselves mods or rockers? Mockers."
Posted by 4headedmonster at 10:10 PM