Should the Beatles have become famous? 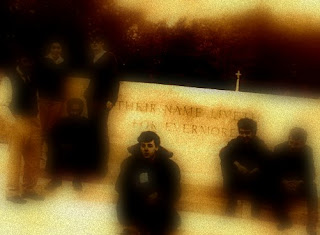 Everyone (well, nearly everyone) knows a couple of things about the Beatles: they made hormonal girls go crazy with cute, fun pop songs, and then they stopped touring and became the rock equivalent of Willy Wonka: delicious, unbelievable products, manufactured by quasi-hermits (at least in terms of public appearances), emerged from a factory normal people rarely entered (Abbey Road).

Most people also know that one of the reasons the group stopped touring was that touring had become not only incredibly tiring (the 1965 US tour involved 10 cities in 16 days), unrewarding (no one could hear them play, including the members themselves), and dangerous (everyone feared for their lives during the 1966 appearance in Manila), but of a quality unacceptable to the group. In short, their performances were musically terrible. Listen to Paperback Writer at just about any 1966 performance; the harmonies at the beginning (admittedly difficult for any group, much less four people who can't hear one another) are pretty off.

However, many fewer people know that the Beatles had something of a full career before ever signing a proper record deal in 1960. During two stints in Hamburg, the band became a high quality bar band, playing 12-hour sets at clubs on the Reeperbahn, the red-light district of the city. In this way, you could argue that the group went through three identities between the time they started in 1957 and their 1970 breakup: insanely good bar band (1958-1962), hearthrobs with great pop songs (1962-1966), and art rock craftsmen (1966-1970). You can get the full Hamburg story in any proper biography of the group (I'd suggest Bob Spitz's book), so here I want to make a few arguments that I think too few people acknowledge.

Yes, Hamburg was something of an apprenticeship for the group. Before leaving, they were little more than an average group - one of many in Liverpool. When they returned from the first trip--and certainly from the second--they were undoubtedly the strongest group in the city, and perhaps in all of England.

But here's something most people either don't recognize or refuse to recognize: the Beatles's time in Hamburg was the only time they were a band, in any normal sense of the word. Once they signed a record deal, their fame grew so exponentially quickly that their lives quickly became all about screaming girls, prying reporters, and mayor's daughters who just HAD to meet them. As George often said, that's when they started giving up their nervous systems for Beatlemania. Once they stopped touring and relegated themselves solely to the studio, they were obviously anything but a normal group.

So what does it mean that Hamburg was the only time they were a normal group? It means that, in some sense, it was the happiest time for the group. I'm not going to sit here and try to convince you that I have some insight into their psyches; obviously I don't. But George has repeatedly said that they probably would have had a lot more fun--and would have been better musicians--if they had remained a bar/club band. They would have been able to play long sets that forced themselves to constantly improve their musicianship (something they couldn't have done if they tried during their 20-minute shows in '64-'66). They would have had a great time playing all the music they loved (Carl Perkins, Little Richard, Motown covers). The group obviously felt that releasing albums like Sgt Pepper's meant a departure from their origins ... what is Let it Be (the album, not the song) but an attempt to get back to their roots? Finally, of course, as a relatively obscure bar/club band, they would have had the freedom to live normal lives, rather than suffer the psychological toll that comes from being global superstars.

Of course, if the Beatles never became famous, we wouldn't have had albums from Rubber Soul to Abbey Road. But what would we--and they--have gained?
Posted by 4headedmonster at 6:37 PM