What Happens when George Harrison is left alone with a Moog Synthesizer? 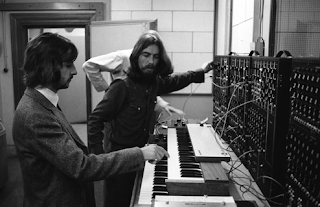 So in an earlier post, I attempted to place a boundary on the Beatles's influence. In this one, I'm going to point out a musical genre the Beatles--or, rather, George Harrison--influenced that you might not know about: avant-garde, highly experimental music.

In 1967, at the famous Monterey Pop Festival, Dr. Robert Moog debuted his synthesizer, appropriately called the Moog synthesizer. At that time, the Moog was a huge, unwieldy sort-of keyboard contraption, but for better or worse, it helped pioneer avant-garde music. The Doors used it in Strange Days, and Simon & Garfunkel used it in Bookends.

But then, in 1969, a certain George Harrison discovered that Abbey Road had a Moog lying around. Without an instruction manual, but with a healthy dose of curiosity and persistence, George taught himself how to turn the thing on (not an easy feat) and create noise from it.

With the help of full-time avant-garde pioneer Bernie Krause and the so-called Siamese Twins, George created two tracks that would become Electronic Sound (1969). One track went on each side of this decidedly non-commercial album that only reached #191 on the US charts, and failed to chart at all in the UK. Although I can't say for sure, I'd be willing to bet that George didn't expect the album to chart, and didn't particularly care that it didn't do so.

Although some deride this album for being non-commercial (the tracks are essentially collections of groans and spurts from the synthesizer without any attempt at traditional structure), others praise it as one of the first serious attempts at avant-garde music.

So there you have it: yet more evidence that trying to put George in the "Quiet Beatle" box is terribly wrong. The guy had the chutzpah to release a completely non-commercial album, and influenced an entire genre, to boot.

And on top of it all, he did his own cover art (yes, that's supposed to be George ... he gets a 10 for his musical courage and a 3 for his ability to accurately depict himself). 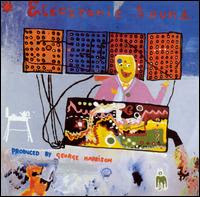