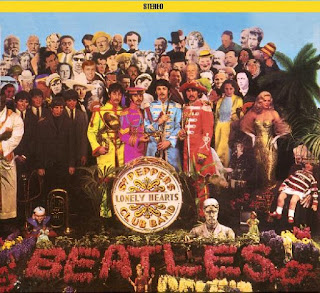 Here's installment #3 of the song categorizations. Obviously, that means it's time for Sgt. Pepper's. However, before I list the categorization, I want to clarify my working definition of the song categories (something I should've done in the Introduction):
Psychedelic Rock: I'm working under the assumption that psychedelic rock involves recording techniques, rhythms, harmonies, etc. that attempt to somehow replicate the mind-altering experience of taking drugs (most notably, LSD). Such techniques could include the use of tape loops to create unusual vocal effects (ex: Tomorrow Never Knows), backwards guitar/vocals (ex: Rain), and motifs that sound somewhat like gibberish (ex: the end of Strawberry Fields Forever).
Novelty/Parody Songs: These types of songs conspicuously attempt to parody a genre the band does not typically work with (ex: Honey Pie) or achieve some task that is somewhat novel for a rock band (ex: Yellow Submarine as a children's song).
Straight Rock (previously known as Heavy Rock): Heavy Rock was the wrong name for this category. I'm thinking of this category as including straight rock songs, as opposed to the rockabilly-style rock songs that draw conspicuously from Carl Perkins, so I'm just going to call it straight rock from now on.
Rockabilly-style Rock: These songs differ from heavy/straight rock songs in their use of rockabilly/country riffs in the style of Carl Perkins. Examples include What Goes On. These songs have a distinct country feel to them.
Admittedly, the difference between heavy/straight rock and rockabilly-style rock is somewhat subjective. As a result, if you disagree with the categorization of any song (or if you think I've left out a category that should be here), let me know in the comments!

I'm including George's ragas as a separate category, since they really don't fit anywhere else.
Now that we've gotten definitions out of the way, let's see what Sgt. Pepper's has for us:
Ballads (1)
She's Leaving Home
Psychedelic Rock (1)
Lucy in the Sky with Diamonds

Raga (1)
Within You Without You
Novelty/Parody Songs (2)
Being for the Benefit of Mr. Kite
A Day in the Life
Straight Rock (7)
Sgt. Pepper's Lonely Hearts Club Band (Intro & Reprise)
With a Little Help From My Friends
Getting Better
Fixing a Hole
When I'm Sixty Four
Lovely Rita
Good Morning Good Morning
Rockabilly-style rock (0)
This was a particularly difficult categorization to do, since the whole aura of Sgt. Pepper's made me want to categorize everything but She's Leaving Home and Within You Without You as Psychedelic Rock. But that's just not really accurate when you take each song on its own. So I guess we're left with 7 straight rock songs, 3 psychedelic rock songs, 2 novelty/parody songs, and 1 ballad. The breakdown is really surprising to me, to tell you the truth, so please let me know if you agree with it.
I also want to note that I put A Day in the Life in the novelty/parody category not to diminish it in any way, but just because it's not clearly psychedelic, but it's certainly not straight rock either. Also, it obviously incorporates elements that are quite novel (the orchestral swells, the tape loops at the end, the radical shift in styles between John's and Paul's parts).
Posted by 4headedmonster at 9:25 PM