what does it mean to be a fan right now? 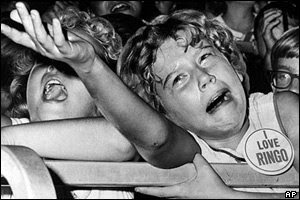 As someone much, much too young to be considered a first-generation Beatles fan (I suppose I'm part of the 2nd generation, or maybe even the 2nd and a half generation), I've thought a lot about what it means to be a fan of a band that broke up 16 years before I was born. There are certainly some who would say that it's ridiculous to consider a band like that your favorite group. People in that camp argue that 1) it's ridiculous to be such a devoted fan of a group that predated your own existence by over a decade, and 2) that each generation should claim its own music, and not poach from other generations.

Let's start with the advantages of being a first-generation fan:

1. You could have possibly seen them live and/or met one of the members while they part of the group.

2. You had the joy of not knowing what the group might release next, and so were able to discover their music along with everyone else, as it came out. You were able to experience, first-hand, the impact of their innovations.

3. You lived in a world in which the vast majority of people were devoted Beatles fans, so you weren't considered odd or out of date.

Pretty obvious, right? Less obvious, perhaps, are the advantages to being a fan now:

1. The entire discography is available to us. This means that we have a bird's eye view of everything they did, which helps us put in all in perspective.

2. The Internet provides a virtually endless supply of early takes, unreleased songs, interview footage, etc. that was not available in the 1960s. I am willing to bet that today's fans know more about the group than fans of the 1960s did.

3. No one--or virtually no one--disputes the influence the group had. Moreover, enough time has gone by to allow extensive analysis of nearly every aspect of the Beatles phenomenon. This has provided fans with biographies, song-by-song analyses, and biopics, many of which are terrible, but some of which are treasures. We now have access to every Beatles song ever recorded, in score form. We have access to the Abbey Road studio notes. Of course, we have access to the story, as told by the boys themselves, in Anthology.

So which generation of fans wins out? Of course, the possibility of seeing the group live is somewhat priceless. But in terms of a fan experience, I would not say that being a second-generation fan is unequivocally worse than being a first-generation fan. Access to information has allowed us to immerse ourselves much more deeply, and come out with a much more extensive knowledge of and engagement with the group's music and eternally fascinating backstory. And isn't that what being a fan is really all about?

And as for live performances, Paul McCartney just won an award for Best Live Act in the UK. 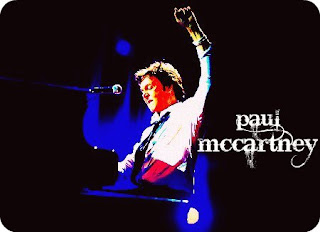 Posted by 4headedmonster at 1:53 PM