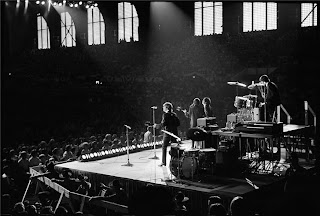 As some of you might know, the Beatles were the most photographed, interviewed, prodded, and sought-after group of musicians--or perhaps group of artists--in history. No matter how much time you spend watching interviews with them or doing google image searches for pictures, you will never see everything that's out there.

Having watched hundreds of interviews with the boys, both from the Beatles years and beyond, I think I can distill what I've learned about the celebrity experience into the following points:

1. It's much easier to deal with fame as a group than on your own. The boys repeatedly said that they felt as though they were the eye of the hurricane; within the group, everyone was calm, but the world around them was going crazy. The existence of the group made the calm easier to establish. They all felt sorry for Elvis because he had to deal with it alone.

2. Being a celebrity makes for both a highly social, but also highly isolating experience. You end up meeting just about everyone (because everyone demands to meet you), but you can never be certain of people's intentions (will they end up being your soulmate, like Yoko or Olivia? Or will they cut off a piece of your hair?). Being a celebrity is also isolating because you can't simply walk down the street; instead, you're shut in dressing rooms all day (in a car and a room, a room and a room ...).

3. Being a celebrity--especially due to excelling at a craft--creates tremendous pressure to continue performing at the same level. It takes tremendous courage, therefore, to continue reinventing yourself. The Beatles could have stuck with the early songwriting formula that worked; instead, they felt that they should continue evolving, not only for their own gratification, but also because they felt they owed it to their fans.

4. Being a celebrity can be frightening and not worth the emotional rollercoaster. George's experience is perhaps the most revealing on this point. He was certainly grateful for having had success in music, but I never got the impression that he felt it was worth having to fear being stalked, attacked, or even killed. Millions of people dream about being famous and loved, but George's honesty about his experience shows us how damaging it can be to sacrifice your nervous system for the sake of a band's success.

5. Becoming incredibly successful doesn't mean that your insecurities go away. The group never stopped being nervous before shows. Despite having performed thousands of times, George still had stage fright before beginning his 1991 Japan tour. John always thought his guitar work and singing was subpar. In fact, sometimes incredible success can exacerbate insecurities; the group was apparently somewhat relieved that not every one of their singles went straight to #1. It showed them that maybe they continued to be successful because their work was good, not because of their previous success.

6. True success is not an accident ... or at least not completely an accident. Sure, the boys were lucky in meeting Brian Epstein, and lucky in growing up in Liverpool. But they were also quite intentional in their decisions. For example, they wore suits because they knew it would help gain them legitimacy. John and Paul used pronouns in their lyrics because they knew it would help their female fans feel as though they were singing to them.

So there you have it! The psyche of a celebrity, as revealed to us by the Beatles. Have anything to add? Put it in the comments!
Posted by 4headedmonster at 8:35 AM