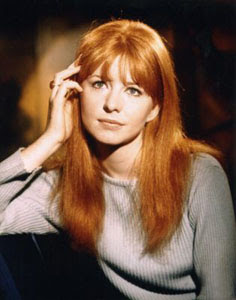 While I continue to ponder the anatomy of a post-Help! hit, I'm continuing the Beatle Support Spotlight feature in the mean time.

In this post, I really have one objective: to convince you that Jane Asher (Paul's girlfriend and fiancee, from 1963-68) was awesome. Let me elaborate: she was a strong, self confident, successful woman in a time when those qualities were, unfortunately, relatively unusual in women, especially in women romantically involved with successful musicians.

Jane was born to a well-to-do London family, and became a child actress. She had several roles in films and television, including a stint as a jury member on the popular British TV show Juke Box Jury, where jury members attempt to predict whether a song will be a hit or a miss.

Jane and Paul met when Jane interviewed the group in 1963. Jane was an attractive dating prospect for Paul not only because she was beautiful, but--more importantly--because her family's upper middle class lifestyle was essentially what Paul aspired to. He spent a significant amount of time in their home, enjoying their intellectually stimulating conversations, and learning French from Jane's mother, who provided the French phrases in Michelle.

Jane's awesomeness really comes, though, from the circumstances surrounding their break-up. The couple got engaged in 1967; however, Jane broke off the engagement in 1968, when she returned home to find Paul in bed with Francie Schwartz. Think about that for a minute. In 1968, millions of girls would have put up with much more than cheating in order to call themselves Paul McCartney's fiancee; moreover, the other Beatle wives never said a word about their husbands' infidelity (to this day, Pattie Boyd talks about how she wishes she had confronted George about his infidelity rather than go off with Eric). The fact that Jane broke off her engagement with Paul shows a tremendous amount about her character.

After her relationship with Paul ended, Jane stated that she would refrain from discussing their affairs publicly. Though they broke up 43 years ago, she has maintained that position, and remains the only major Beatles affiliate to not publish her recollections in any form. Apparently, her desire for privacy and respect for decorum trump any prospects of financial profit for Jane Asher.
Posted by 4headedmonster at 9:32 PM