the anatomy of a post-help! hit (the grand conclusion, part 2) 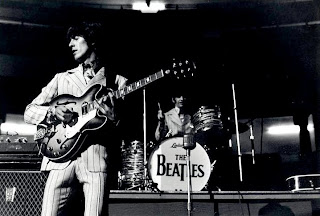 Welcome to part 2 of the hit anatomy project's conclusion! As I mentioned in part 1 of the conclusion, part 2 will involve an analysis of the post-Help! singles. Since there's no way of definitively knowing which album-only tracks are "hits" (i.e. are the most popular), we can only define "hits" as the tracks released as singles in the UK. We can, of course, include all the singles, since they all charted quite well.

Here are the songs we're working with. I've grouped them based on the way they were released. The first song in a pair is the A-side track (i.e. the one expected to be the radio hit); the second is the B-side (i.e. the one expected to be less of a hit). In a couple of instances, the group decided that both tracks were strong enough to be considered A-sides. These types of singles were called double A-sides. A star indicates that the track was also included on an album (of course, the album tracks include only those on the official British releases). The peak UK chart position follows each pair:

So how can we categorize these tracks, using the categories we came up with for the album tracks?

So let's look now at the percentage breakdown. For each song category, the percentage of overall post-Help! tracks in that category is in parentheses.

Looking at the difference between the singles percentage and overall tracks percentage shows us whether the characteristics of the singles is an accurate representation of the characteristics of the band's output during that period. Now, you'd expect straight rock, ballads, and some more palatable psych rock to be overrepresented in the singles, since those are the types of songs traditionally considered "radio-friendly."

In fact, ballads are slightly underrepresented, while ragas are overrepresented (though that only means that 1 of the 2 ragas the band produced in that period was released as a single). However, the most notable--and surprising--thing about these two distributions is how similar they are. This suggests that the band simply released as singles the songs it considered the strongest; not simply the ones that might be the most radio-friendly.

Finally, let's look at which songs the band decided to highlight as A-sides. These are the ones the group expected would be the biggest radio hits.

All the ballads are A-sides.

Only one psych rock is an A-side, and it's usually listed after Penny Lane.

8 out of the 12 straight rock tracks are A-sides.

Only one novelty song (the most radio-friendly one, Yellow Submarine) is an A-side.

The sole raga is a B-side.

This strongly suggests that, though the characteristics of singles is, overall, very similar to the characteristics of the group's overall output, the songs chosen as A-sides were the most traditionally radio-friendly tracks. In this respect, we see the group not taking as much of a risk as we might have expected it to. That doesn't diminish the quality of the A-side tracks, but it does mean that the group tended to choose its most conventionally radio-friendly material to highlight as potential chart-toppers.

In the final hit anatomy post, I'll closely analyze only the A-side singles to determine, at long last, the anatomy of a post-Help! hit.
Posted by 4headedmonster at 8:41 PM