when a celebrity becomes real 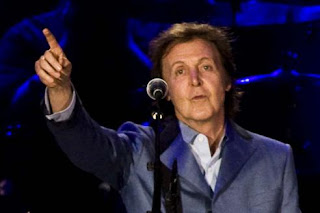 I just returned from my fourth Paul McCartney show, and the third one I went to this summer. I was planning on writing a review of the shows after I had attended all three that I was planning on going to this summer. I am going to write about my experience, but not in the form of a traditional review, which you can read in any number of other places. Instead, I'm going to discuss what happens (at least, what happened to me) when, in the eyes of a fan, a larger-than-life celebrity becomes a real person.

Now, I want to make it clear that I try very hard to not engage in idol worship when it comes to the Beatles. Obviously, I am a pretty huge fan; but I don't play down their character flaws. George seemed wonderful in many, many ways, but he chronically cheated on Pattie. There's no excuse for that. Paul can be an incredibly sweet person, but he can also be arrogant and narcissistic. I could go on, but you get the point.

Regardless of my willingness to point out the boys' flaws, however, it's tough to not think of them as something other than real people. The Beatles phenomenon has been hyperbolized (yeah, I made up that word ... it seemed appropriate) to such a degree, that it's tough to not think of the members as almost demi-gods. Or if not demi-gods, at least part of some other subset of humanity. Just another Joe Schmoe couldn't have come up with A Day in the Life or Strawberry Fields Forever, right?

I guess I had unconsciously bought into the idea that John, Paul, George, and Ringo were/are somehow different from the rest of us. However, standing 20 rows of seats from Paul this evening--and, thus, seeing him very clearly--made me suddenly realize, on an emotional (as opposed to just intellectual) level that he is just another person.

Now for many people, this might mean that the "magic" is gone. But once I realized that he's just a 69-year-old guy who gets up on stage and plays his music for people, I looked behind me at the 35,000 people singing along and genuinely enjoying themselves. At that moment, I realized that the very fact that Paul--and the rest of the ex-Beatles, and every other successful artist, politician, etc--is just another human being, makes it all that much better.

Paul is no different from the rest of us; he simply has an unusual ability to translate the human experience into music. Indeed, if his experience on this earth were really that different from ours, his music wouldn't resonate with people the way that it does. Paul's humanity, with all its flaws and contradictions--and, indeed, all of the ex-Beatles's humanity--is what ultimately makes their music so appealing to generations of people.

So when we see Paul, who has lost Linda, John, and George in the past 32 years, get up on stage and continue to pour his heart and soul into singing songs with timeless, universal messages (Let it Be, Hey Jude, and Yesterday are cliched, but useful examples), we really see one of us. We might think we're seeing someone larger-than-life; we might react that way, too. But, in reality, the emotions we feel when we see an honest artist like Paul perform come from the fact that we see ourselves--or at least part of ourselves--reflected in him, through his music.

So why have so many generations of people been moved by his music, and the music of the other ex-Beatles? Because it drips with humanity's flaws and universal experiences, and expresses those flaws and experiences better than most every other musical attempt to do so. And that, my friends, is my answer to the perennial question of why the Beatles's music has lasted as long as it has.

The music of the Beatles, and that of the members' solo careers, thus represents what artists should be creating: honest expressions of their experiences, which likely resonate with others, who thus find the artists' expressions personally cathartic. The ancient Greeks spoke of how true art should result in catharsis, which means psychological relief through the expression of strong emotions. Thus, according to the ancient Greek definition of art, the Beatles as a group, and the individual members, were true artists.

Let me end with a story and a quote. I shared a cab with a woman who said she's had a crush on Paul since she was eight years old, in 1964. She said to me, "I'm still a fan, and I feel like I have an unspoken bond with Paul, because he and I lost our significant others around the same time. So when he sings 'Maybe I'm Amazed' for Linda, I think about my husband."

And, finally, a quote from John: "We were four guys. I said to Paul 'do you want to join me band?' you know? And then George joined, and then Ringo joined. We were just a band who made it very, very big, that's all." John might have said that to play down their impact, but for me, being "just a band" makes all the difference.

Lastly, I think this George picture is appropriate because he seems very vulnerable and real in it. 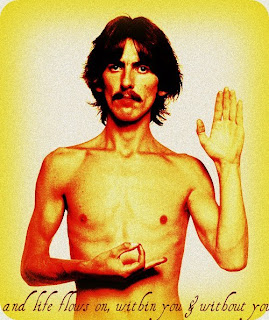