the best evidence of the Beatles's genius beyond the albums themselves 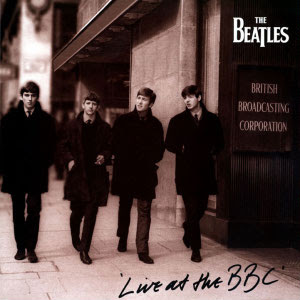 Looking back at the most recent posts, I realized that they're pretty heavy on the analysis. I don't want this blog to seem like an academic project, so this post is going to be much lighter.

I mostly want to highlight the Beatles's performances on the BBC, which you can find nicely collected on the Live at the BBC album. The album includes performances from 1963 - 1965 and are mostly live in studio, meaning there isn't any overdubbing or other fixing of mistakes and whatnot (not that there are really any mistakes to speak of).

Beyond featuring 56 songs and 13 tracks of dialogue, this album contains a nice preview of the brilliant songwriting to come (and some excellent examples of the brilliant songwriting the group already had under its belt). There are, of course, strong originals like the Everly Brothers-inspired "I'll Be On My Way" and even "Thank You Girl." However, more interestingly, there are creative interpretations of dozens of popular and not-so-popular singles of the time.

Among the more well-known tracks, we've got the boys's take on Chuck Berry's "Carol" and Smokey Robinson's "You've Really Got a Hold On Me." Lesser-known gems include Arthur Alexander's "A Shot of Rhythm and Blues" and Carl Perkins's "Sure to Fall (In Love With You)".

The high quality of the group's interpretation of these songs, and the fact that they spent the time to both find and creatively arrange them, shows their innate musical sensibilities and their determination to distinguish themselves among the dozens of rote cover bands with one or two passable originals.

So while it's true that the group went through a transformation between the era of A Hard Day's Night and Beatles For Sale and the era of Sgt Pepper's and the White Album, we shouldn't be surprised. If we just examine the highly creative and intuitive covers that appear on this album, we quickly realize that the writing was on the wall.

So for some great songwriting and a rockin' good time, check out Live at the BBC. It's the best evidence we have of the Beatles's musical genius beyond the group's original compositions.
Posted by 4headedmonster at 9:05 PM