how the beatles became the first rock band, and then disbanded in 1966 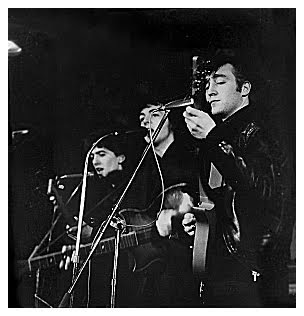 If you've been following this blog from the beginning, you know that one of my objectives is to place boundaries on the Beatles's influence, and thus more accurately assess their legacy.

This post won't diverge from that mission, but it will make some pretty lofty statements about the extent to which the way the band operated presented two wholly novel mechanisms for producing music in a group setting: first, the rock band (which encompasses 1957-1966); and second, the artistic cooperative (which encompasses 1966-1970).

Recently, a documentary was released about the Cavern. In it, one woman who attended 150 Beatles shows at the Cavern noted that the Beatles were a novel act, not only because of their musical intensity, but because they had no obvious lead singer. She's right that, for that time, having no lead singer was quite unique. Most bands followed the formula of "X and the Ys": Rory Storm and the Hurricanes, Billy J. Kramer and the Dakotas, Cliff Richard and the Shadows, etc.

The Beatles--for reasons that remain unclear--decided to share vocal responsibilities. Perhaps it was a necessity borne from their affinity for improving upon girl group singles, which involve a lot of 3 and 4 part harmonies, as opposed to just one lead vocalist. Whatever the reason, they became the first group to use that formula.

Additionally, by the time the group started recording in 1962--and increasingly more until they released their first album of all originals in 1964--, the group pushed their own compositions. Up until that time, most artists sang songs written by songwriters in the Hit Factory, or Tin Pan Alley. Certainly, Elvis did not write any of his own music. A producer found what he thought would be a hit appropriate for a given artist, and declared that the artist would record that. George Martin tried to do that for the Beatles with "How Do You Do It," but the group resisted, saying the song wasn't fast enough or rough enough for their tastes.

Indeed, the brand of rock music the Beatles played up until the whirlwind 64/65/66 tours (so in Hamburg and the Cavern) was rougher, dirtier, and grungier than anything else remotely well known at the time. Moreover, it was guitar-oriented, which wasn't a given for rock music at the time.

For these reasons, we can consider the Beatles the first rock band. Pretty insane, right? 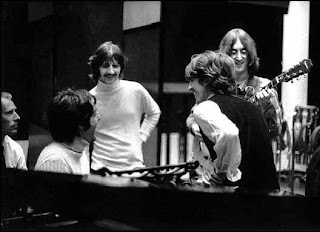 Lennon once said, "We stopped being a band when we stopped going to record stores and improving upon our favorite singles."

John's right, I think, except I'd say they stopped being a band when they stopped touring. Not only did the end of touring mean the end of unified performances, but it also meant the end of an all-encompassing group mentality to recording. It's well known that the three main songwriters began to concentrate on their own songs, without regard to whether all four members could appear on the recording. This resulted in some songs that were no longer appropriate for the four-person rock group setup (Tomorrow Never Knows, I Will, Within You Without You, etc.).

Instead, the group concentrated on simply creating whatever musical statement its artistic sensibilities and instincts dictated. They collaborated with one another when it seemed natural and appropriate, but didn't consider collaboration a given. As a result, I think of their setup as more of an artistic cooperative than anything else. Think of a commune, where a group of artists live together and create art under the name of the commune, collaborating sporadically, but not 100% of the time.

So there you have it. The Beatles's contribution to the musical world includes two wholly novel systems for producing music.
Posted by 4headedmonster at 10:47 PM