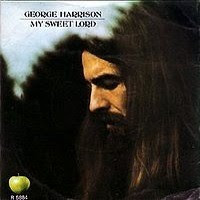 As you might know, George Harrison's "My Sweet Lord," has an unfortunate history (and an ironic one, given its message of universal love, acceptance, and enlightenment). George was accused of subconsciously lifting the chord progression and part of the melody from "He's So Fine," a 1963 hit by girlgroup The Chiffons. After literally decades of legal battles--including a failed attempt by George to simply give "My Sweet Lord" to the holder of the rights to "He's So Fine"--the suit finally ended with George paying $587,000 for Bright Tunes Corporation, the entity that had filed the suit.

The entire lawsuit was somewhat ridiculous, not least because the idea of being penalized for subconsciously lifting a portion of another song is undoubtedly a terrifying prospect--and possibly unavoidable situation--for any songwriter.

In any case, I've always been curious as to how much of the two songs are actually similar. In this post, I'll analyze both the chord progressions and the melodies to determine where the songs converge. I'm also going to analyze the gospel standard "Oh Happy Day," since George argued that if he had lifted from any song, it was probably that one.

For reference, here are links to all three songs:
He's So Fine
Oh Happy Day
My Sweet Lord (the original version)

Just listening to all three songs back-to-back, there are definitely similarities in the melodies, I think. But let's take a closer look. After all, there are countless songs that sound like one another (think early blues, early rock n roll). Is there really enough of a similarity here to merit a lawsuit?

Let's start with the basic chord progressions for all three songs:

In the second half of the song, George uses additional chords, but the above progression is the bulk of the song.

So this song is basically two chords: G and A. They change it up a little in the second half of the song, but by that point it sounds nothing like "My Sweet Lord."

Likewise, only about the first 90 seconds of this song sound (to me at least) similar to My Sweet Lord. There seem to be two chord progressions going on here:

Ok, so you don't need a PhD in Music to realize that the chord progressions are different among all three songs. Before we move on to melody, let's exhaust the only other reason I can think of as to why the bright folks at Bright Tunes might have decided that George subconsciously plagiarized the chords from He's So Fine: the interval between the main two chords used.

As you probably can tell, in all three songs, there are basically two chords being used in each musical phrase (in other words, there are two chords being used when the artists sing the lyrics "He's So Fine," "Oh Happy Day," and "My Sweet Lord"). The interval between the chords just means the number of notes between the root note (ex: Eb in an Eb chord, G in a G minor chord, etc) of one chord and the root note of the other. I'm not going to bore you with the details, but trust me: the intervals are not the same between He's So Fine and My Sweet Lord.

So what about the melodies? Let's just look at the most similar parts:

The notes George is singing when he sings "My sweet lord, oh my lord, etc" are: B, Ab, F#

The melody in Oh Happy Day is obviously not similar to that of My Sweet Lord.

So what about the melodies of My Sweet Lord and He's So Fine? Yes, both are three notes long, but the intervals aren't the same, so they really aren't similar enough to merit a lawsuit.

My conclusion (although based on a non-professional analysis of these songs) is that the similarities are not significant enough to merit a lawsuit. So why did one occur? Besides greed on the part of Bright Tunes (The Chiffons even had the nerve to record a cover of My Sweet Lord shortly after the lawsuit was filed), I think it's because both songs are based largely on a two-chord progression and a three-note melody. Does that justify a 20+ year lawsuit and $587,000 (plus thousands more in legal fees)? I think not.

But at least we got this catchy tune and hilarious video from George out of it: This Song

Email ThisBlogThis!Share to TwitterShare to FacebookShare to Pinterest
Labels: george harrison, he's so fine, my sweet lord, the chiffons, this song