what performing in Hamburg nightclubs and Polythene Pam have in common 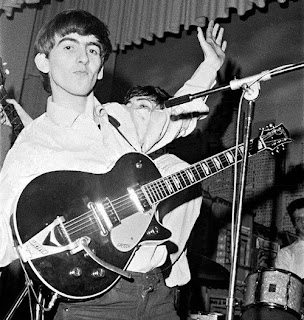 In the last post, I talked about how the creative arrangements in the tracks on the Live at the BBC album foreshadow the Beatles's brilliant songwriting, making the strength of their discography a little less surprising. In this post, I'll add further support to that argument by suggesting that the breadth and depth of their Hamburg set list foreshadows their affinity for novelty songs and genre-expanding musical ideas in general.

I'm using the set list from the band's December 1962 performances at the Star Club in Hamburg as the basis for this analysis, since no one knows for sure which songs the boys played throughout their residencies in Hamburg. We do know that the number of songs in their toolbox was quite high, though; they've been called a living, breathing jukebox.

Here are the tracks I'm using to support the above claims. As you'll see, the list includes both well-known rock n roll and rockabilly songs, and relatively obscure tracks that the boys decided were actually high quality:

Till There Was You (shows competence in arranging a ballad; a hit from a musical in the set list of a rock group was pretty unusual at the time ...)

Hippy Hippy Shake (hit in England, but after the Beatles performed it … released in 1959 by Chad Romero, and a hit in Australia; so it was pretty much unknown in '62 in England)

Besame Mucho (hints of a novelty song, at least for a rock group; hit during WWII)

A Taste of Honey (ballad/novelty; released only in September 1962 … doesn’t seem to have been a big hit)

Let's compare the above set list excerpt with the standard set list of Rory Storm and the Hurricanes, the second most successful rock group from Liverpool. This is the complete set list the group typically used in 1963 and 1964:

As you can see, with the exception of "America," Rory Storm and the Hurricanes stuck to what was safe: covers of straight blues, rock n roll, and rockabilly.

So there you have it! People talk all the time about how the Beatles transformed themselves, but hopefully I've helped convince you that their career really reflects the development of musical sensibilities and courage that was there from the start.

The last thing I want to say is this: people make a big deal out of the fact that the boys took drugs (mostly pot and then LSD). They try to argue that the shift from A Hard Day's Night to Revolver to Sgt Pepper's is wholly due to the influence of drugs. I hope that this post, and the one on Live at the BBC, convinces you that, while some of the substance of the post-Help! tracks was influenced by drugs, the very fact that the group expanded beyond A Hard Day's Night and Help! was simply because their musical sensibilities had matured beyond the straight pop music format, not because they discovered weed and LSD.

Finally, I want to thank James D. Jones for providing the musical experience that inspired this post.

As always, let me know what you think of this analysis in the comments section. :)

Posted by 4headedmonster at 7:58 PM