a guide to george harrison 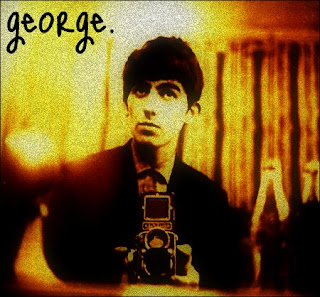 In celebration of the release of the trailer to Martin Scorsese's upcoming documentary, George Harrison: Living in the Material World (which you can watch here), I've provided a little guide to George Harrison. It includes the ten tracks you might have either not heard, or forgotten about, a few choice George quotes, two great George videos, and my interpretation of his philosophy on God and life in general. I hope it inspires you to spend some time with his music and words of wisdom, which I promise will be extremely rewarding.

All of these are available on officially released albums. I wanted to keep them accessible, so no bootlegs here. These aren't in any particular order.

1. Let it Down (acoustic demo)
2. While My Guitar Gently Weeps (acoustic version - Anthology 3)
3. Marwa Blues (Brainwashed)
4. Run So Far (Brainwashed)
5. Your Love is Forever (Somewhere in England)
6. Beautiful Girl (33 1/3)
7. The Lord Loves the One (Who Loves the Lord) (Living in the Material World)
8. Don't Let me Wait Too Long (Living in the Material World)
9. That's the Way it Goes (Gone Troppo)
10. Art of Dying (All Things Must Pass)

The Pirate Song: This is a skit George did on Rutland Weekend Television. Monty Python-style comedy was a big part of George's life, so I had to include something that acknowledges that.

All Things Must Pass epk video. You can't really find this on Youtube anymore, thanks to EMI, but it's more than worth the $2 it costs on iTunes. It includes interviews with George, where he discusses why he redid My Sweet Lord, and shares more of his wonderful words of wisdom. It's a little bittersweet, since it was filmed in 2001, but it's very well done.

This is what I've concluded, based on watching many interviews (I think I've watched every George interview that's currently on Youtube) and listening to the vast majority of his solo catalogue. If you disagree with what I've written here, please let me know.

So, here's life, according to George:

Oh, and Monty Python, Formula One racing, and guitars are really pretty awesome.

There are countless gems I could have picked, but here are just a few:

As long as you hate, there will be people to hate.

I think people who can truly live a life in music are telling the world, "You can have my love, you can have my smiles. Forget the bad parts, you don’t need them. Just take the music, the goodness, because it’s the very best, and it’s the part I give."

Beware of sadness. It can hit you, it can hurt you, make you sore, and what is more, that is not what you are here for.

Posted by 4headedmonster at 4:25 PM